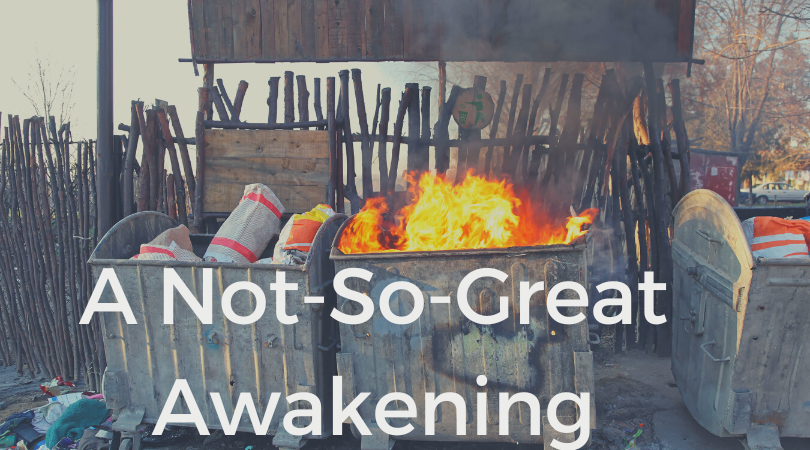 I’m working on several posts, including the conclusion of our survey on Martyn Lloyd-Jones’ conference message regarding reactions to revolutionary times as well as several of the series I’ve started and need to wrap up (Joel, Holy Spirit, Geographical Dimensions of Ekklesia, etc.). However, I want to briefly interrupt those efforts to mention a dangerous and widespread belief that is growing like wildfire in the U.S.

Over the last several years, particularly those of the 45th presidency, there has been an online, social media fueled promotion of expecting “The Great Awakening”. I can’t tell you how many times I’ve read this statement or seen it in memes before finally coming to a conclusion on it this week. The Lord often reveals things slowly so that we can mull them over without giving an emotional or not-so-well thought out opinion on them. Such was the case with this.

As you may know, the U.S. (as well as Great Britain) was home to two Great Awakenings. The first occurred in the 1730’s and 1740’s involving Jonathan Edwards, George Whitfield, William Tennent, the Wesley brothers, and others, while the second, somewhat more dubious, occurred across three phases from 1795-1835 involving James Mcgready, Timothy Dwight, Lyman Beecher, and Charles Finney among others. Depending on who you read, these periods may have been mixtures of emotion vs. emotionalism as well as revival vs. revivalism, but one thing is certain. Each of these movements involved the preaching of gospel in bringing sinners to repentance from sin and faith in the Lord Jesus Christ. With perhaps some exceptions, noting of course dangers of manipulation, they were chiefly concerned with the inner man and his condition as a sinner in the hands of an angry God. This is a non-negotiable aspect of any true work of revival through the Holy Spirit. Anything less is simply a work of man.

With this in mind, the expectation and indeed the promotion of another Great Awakening has been sweeping the land, mostly among those with an eye towards the political happenings and the wranglings for worldly power. This particular great awakening also has a “gospel”, but in this case it is not so much concerned with the inner man and his condition before the Righteous Judge of all the Earth. Rather it is instead concerned with opening the eyes of man to the external condition of the world’s evil systems, chiefly that of political corruption which also includes an emphasis on harm done to children. This great awakening, resulting in being awake, not woke by the way, has an accompanying conversion out of liberalism and into conservatism. It is claimed to be a work of God in awakening normies, sleepers, and sheep, to the realities of evil in the world, but it does not address the inner man; indeed it does not address the reconciliation that is needed between God and sinner. Herein lies the problem.

While certainly the world’s systems are evil and corrupt, being under the deception of the ruler of this age, coming to an “awakening” of this will not save a person’s soul. While the previous Great Awakenings dealt with the evils of the inner man, this not-so-great awakening of today is primarily concerned with the evils external to man. Which would beg the question, by what standard are these external evils to be condemned? Are they by God’s standards found in His Holy Scriptures? If so, then what is to be done about it? How are these evils reconciled to the holiness of God? Because it is devoid of the true gospel it is by nature an ecumenical movement. Meaning anyone, not just Christians, but anyone who recognizes worldly evil can attempt to open the eyes of normies, all the while believing anything they want about Almighty God and His Son Jesus the Christ. This particular awakening does not stop with opening the eyes of the sleeping to the realities of corruption around them, much like Neo from the Matrix. It has an “ascension” of the mind and consciousness in its eschatological view as well as a utopia where the wrongs of the world are made right. It is not only influenced by false forms of Christianity (mostly that influenced by the New Apostolic Reformation) and politics, but contains elements of New Age spirituality and mysticism. Look for words like enlightened, awakened, light, ascension, consciousness, Christ consciousness, energy, energy healing, vibration, wavelengths, etc. with a few out of context Scriptures thrown in for good measure.

If we want a true Great Awakening, that marked by a genuine work of the Spirit, then it must be accompanied by the bold preaching of the Gospel. It must be the Word spoken and applied to the hearts of men bringing regeneration and a heart with repentance and faith in our Lord Jesus Christ who shed His blood on Calvary propitiating the wrath of God for all those who would believe. An awakening that is concerned with those things external to man will look for an external savior. Into this void of expectation will not step the only begotten Son of God, rather this void can only be filled by antichrist.

Be alert; be sober-minded; stick closely to the Scriptures; and may the God of all peace fill you with comfort and hope through the salvation that only comes through Jesus Christ our Lord.