Perhaps with all the different versions out there these days, you’ve asked yourself this very important question.  Maybe your response in the past has been, “Why does it matter, don’t all Bibles say basically the same thing?” a fair and intelligent question to ask.  I would venture to say that the majority of people fall into 3 categories with respect to the Bible version they use 1) The KJV and 2) The version of their local church 3) A gift.  The first group is likely exclusive to the KJV because of tradition, either it’s what they grew up reading or what their parents read.  The second group has most likely chosen their Bible based on the version used at the church they attend.  While neither group is wrong, it does beg the question, “Have they done their due diligence to research Bible translations for themselves and then choose the one they think is right for them?”  In this post, we’ll look briefly at two major errors in the world of Bible translations and how they should impact your selection of the right version for you.

When I started teaching a Bible study at my current place of employment, I began to realize how frustrating it can be to lead a serious study with multiple Bible versions being used, most of which were not a “word-for-word” translation (more on that in a minute).  Prior to beginning the study of Ephesians, I thought it necessary to discuss these differences and provide information on the various translations in order to avoid the “My Bible says this” game, which essentially pits version against version and muddies the water for understanding what the Lord wants to communicate through His word.  In having this discussion, it became clear that many people do not realize the major differences between translations.  The following chart is helpful to point out these differences (my apologies on the origination).

Note on this chart the translations range from the Interlinear, a “word-for-word” version to the Message, which is classified as a “thought-for-thought” version, but is really no Bible translation at all (more on that later).  The philosophy behind the word-for-word, or formal equivalency translation, is to maintain as close as possible to the original language manuscript, which would be Hebrew and Aramaic for the Old Testament and Greek for the New Testament, essentially placing the focus on the original structure.  This is why, for instance, that the New American Standard Bible (NASB) would be considered the “most literal” English translation, but lacks smooth sentence structure.  As you can see on the chart, the English Standard Version (ESV) attempts to maintain that level of literalness, but increases the readability that comes from a more modern language than say the King James Version (KJV) or New KJV (NKJV).

The intention of the thought-for-thought translation, or what’s called dynamic equivalency, is accessibility over structure, meaning an attempt to make the version more readable vs. maintaining the original language structure and word usage.  This isn’t a trivial decision and if taken too far is where translations can begin to get into trouble and become “loose”.  The reason is because when a translation deviates from a more literal, word-for-word philosophy, words get omitted and more translation liberties can be made.

Take for instance the passages from the ESV and The Message below:

“5 Those who think they can do it on their own end up obsessed with measuring their own moral muscle but never get around to exercising it in real life.  Those who trust God’s action in them find that God’s Spirit is in them-living and breathing God! 6 Obsession with self in these matters is a dead end; attention to God leads us out into the open, into a spacious, free life.” Romans 8:5-6 Message

The first major difference in these passages is that the ESV retains the word “flesh”, which serves to support the Apostle Paul’s distinction of the flesh vs. the spirit made in Romans 6 and 7.  The Message implies that the problem is moral will-power, not an inherent sinful nature.  Secondly, note that The Message says to “trust God’s action in them” while the ESV reads to “live according to the Spirit set their minds on the things of the Spirit”.  The first implies a passivity in sanctification, while the latter rightly commands believers to “live” by the Spirit and “set” their minds on the Spirit.  Finally, in verse 6 we see that the more literal ESV translation reads “to set the mind on the flesh is death” while the loose paraphrase of Eugene Peterson’s The Message says, “obsession with self in these matters is a dead end.”  While it may soothe the conscious of the reader to see that “obsession” with the flesh is a “dead end” the biblical truth is that the “mind set on the flesh is death”, meaning spiritual death and separation from God, not merely a dead end.  In fairness to this discussion, The Message is a paraphrase of the Bible, but has been marketed as a viable translation, which clearly it is not.  Its author Eugene Peterson is likewise culpable by making no attempt to correct this error or to distinguish his work as an attempt by man to explain what God’s Word says/means.  For more information on this see Tim Challies’ blog post on the translation philosophy of Eugene Peterson. http://www.challies.com/bible/eugene-petersons-philosophy-of-bible-translation

We’ve looked at an example from both ends of the spectrum, but what about one right in the middle, perhaps from the most popular version available the NIV.  Let me state, that as the chart above shows, a thought-for-thought translation, the NIV is not as loose as some of those on the far right.  It has been a reliable translation for over 30 years.

But right off the bat we run into problems because the NIV was designed to be continuously updated to reflect modern language changes, so as a result we have the original, the NIV1984, the TNIV, and the newly released NIV 2011.  It should be noted that other versions of the NIV will no longer be published or supported, now that the NIV 2011 has been released.  Below is a passage from Romans 3 out of the NIV 1984 (which most of us either personally have or have in our churches) and the corresponding passage from the ESV.

“God presented him as a sacrifice of atonement, through faith in his blood.  He did this to demonstrate his justice, because in his forbearance he had left the sins committed beforehand unpunished-“ Romans 3:25 NIV1984

“Whom God put forward as a propitiation by his blood, to be received by faith.  This was to show God’s righteousness, because in his divine forbearance he had passed over former sins.” Romans 3:25 ESV

Now upon first reading, it may not seem like a big deal that “sacrifice of atonement” is used by the NIV instead of “propitiation”.  But, if you’ve followed along with the posts here over the last couple of months, you would know that propitiation is a key word, one that must be dealt with in understanding the atonement and that its use has significance in understanding the justice of God.  The NIV makes this same choice in Hebrews 2:17, 1 John 2:2, and 1 John 4:10.  You also need to know that propitiation was actually omitted from several of the more modern “translations” as a liberal attempt to downplay, disregard, and otherwise remove the idea of penal substitutionary atonement, led chiefly by C.H. Dodd. (1) (2) (3)  This is just one example of our first translation problem, namely the omission of words from the original language manuscripts.

Our second major problem reared its head in 1952 with the publication of the Revised Standard Version (RSV), based on the King James Version and its update of 1901 the American Standard Version (ASV).  As you can see from the chart above, the RSV was a more literal translation, so where’s the problem you may be asking.  Well, many felt it was agenda driven with regard to some liberal theological biases.  It should be noted, that following along this same line as the RSV, i.e. from the KJV, is where the ESV was born.  These agenda driven biases from the 1950’s peaked in 1989 with the publication of the New RSV (NRSV).  The NRSV took a more liberal approach to translation and had their way with gender issues (1).

Similarly, in 1995, Zondervan published its update to the NIV 1984 and changed its name to Today’s NIV (TNIV), but included gender issues of its own.  The TNIV was considered so poorly translated with its liberal, feminist agenda that it was a colossal failure.  Many top theologians outright rejected the TNIV, including the Southern Baptist Convention who condemned it and ruled for So. Baptists churches to inform their congregations of the inherent dangers. (4) Which brings us to the latest Bible translation available today, the new NIV or NIV2011.  Many have seen this latest version as an attempt by publishers/translators to correct the failed TNIV and restore the reputation of the NIV.  While this is a highly contested academic debate, research from the Council on Biblical Manhood and Womanhood provides statistical analysis of the changes from the TNIV to the NIV2011.  Their research indicates that 75% of the gender translation issues that were raised with the TNIV remain unchanged with the NIV 2011.  Enough change to make it a separate version, but hardly an adequate response to a version that is nearly unanimously rejected (except by Rob Bell).  It’s likely that for this reason, the Southern Baptist Convention has followed suit with their decision on the TNIV to the new NIV 2011 as well. (5) For more comprehensive data from the CBMW, see here: http://www.cbmw.org/Resources/Articles/An-Evaluation-of-Gender-Language-in-the

So what is a person to do with this information?  First, understand that although no English translation is perfect, all Bible versions have not been created equal and while the intent to keep the basic message is the same, some of the more “loose” translations are woefully inadequate.  Second, realize that the difference between more literal, “word-for-word” translations versus a more dynamic, “thought-for- thought” version can often result in the omission of key words.  Third, sometimes, such as in the cases described above, those dynamic translations can be too heavily influenced by societal changes and agenda.  We can debate whether a “language update” is necessary after just 27 years (NIV 2011), but altering original phrases and meanings is non-negotiable.

In short, which Bible version is right for you?  Choose a more literal translation as your primary reader and if you prefer the “thought-for-thought” versions, use them for support and understanding of the other.  A good parallel Bible might help you make the transition to reading and understanding more literal versions.  Below I’ve included several resources, including a readibility chart (grade level) for multiple versions. 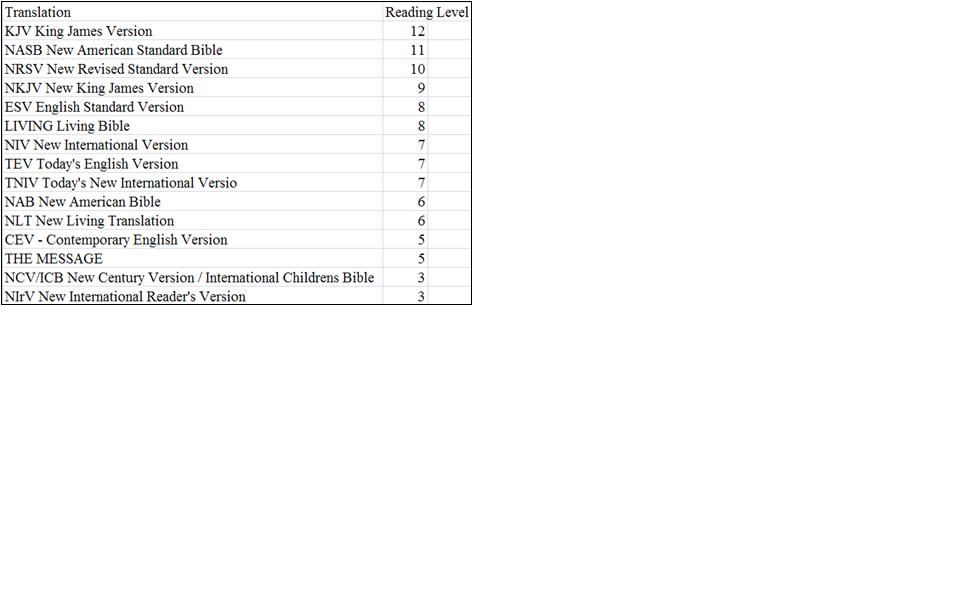 Today’s post was largely written a week or so ago, but today Dan Phillips from Pyromaniacs blog wrote the following post on the NIV to ESV change by Kevin DeYoung’s church.  It is a well-written article based on a review of DeYoung’s pamphlet, Why Our Church Switched to the ESV: http://teampyro.blogspot.com/2011/08/booklet-review-why-our-church-switched.html

For more information on translations, including the NIV 2011 controversy see the articles below: 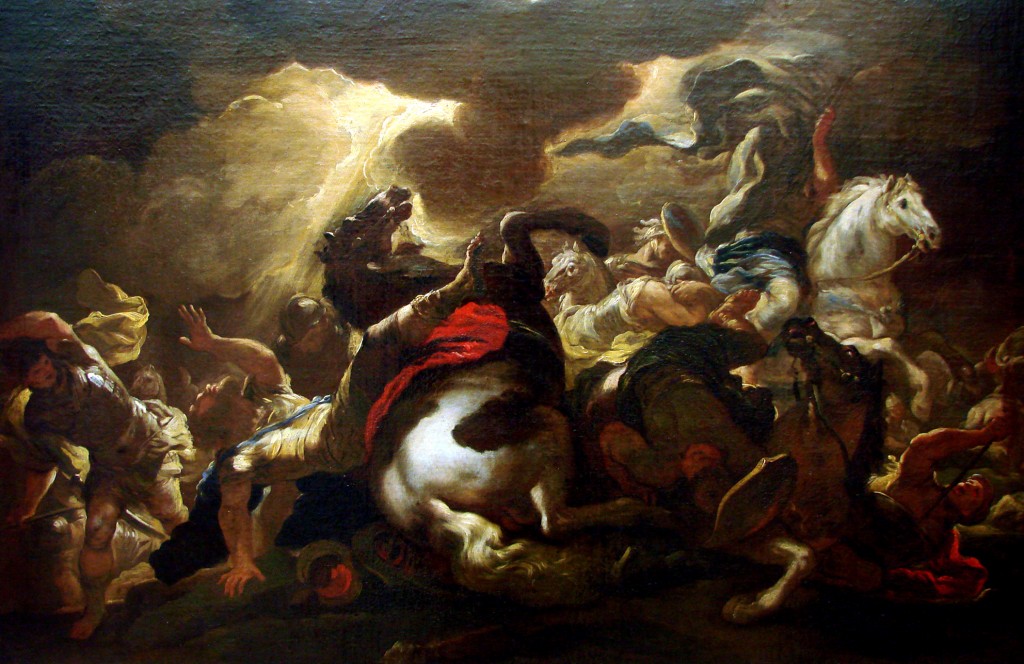