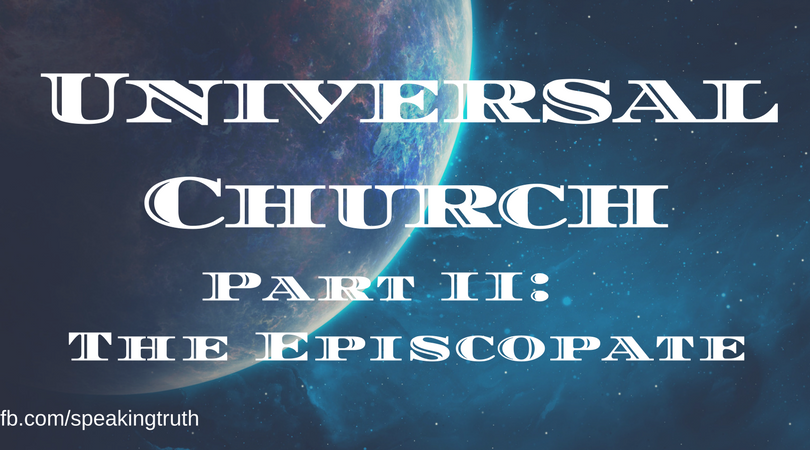 [On Thursdays, beginning March 8, 2018, I will publish a series of posts on The Historical Development of the Universal Church.  I began addressing this at an introductory level last year (see index tab) and with nearly a full year of thoughtful reflection, I’ve prepared a series that will overview this important, yet oft-misunderstood doctrine.  It will not appeal to everyone and may not interest anyone, but for the sake of clarifying my own thoughts, at least, I want to publish them here.  Hopefully they will be instructive and thought-provoking.  The majority of them have already been written, so as not to interfere with regular posts.]

If we are to properly understand the development of the universal church theory, then we must understand the foundation from which it sprang, namely the formation of the office of bishop, collectively called the episcopate.  According to church historian Philipp Schaff

“The most important and also the most difficult phenomenon of our period (AD 100-325) in the department of church organization is the rise and development of the episcopate as distinct from the presbyterate.” (Vol. 2 pg. 133)

Though I believe it can be shown that the presbyterate was itself a modification of the New Testament model, nevertheless it is clear that the episcopate shifted into a position of primacy during the 2nd Century.  Schaff continues his overview of this development by pointing out that it was driven by

“the need of a tangible outward representation and centralization, to illustrate and embody to the people their relation to Christ and to God, and the visible unity of the church.  It is therefore inseparable from the catholic principle of authority and mediation.”

The episcopate was a divergence from the New Testament supernatural, organic expression of the gathering of God’s people towards a more formal, rigid, and institutional organization whereby the bishops assumed authority and mediated God to the people.  While discussing the validity and evolution of the episcopacy is outside the scope of this overview, we will summarize its key proponents and then conclude with a word about its impact on the historical development of the universal church.

The first seeds of this development of church governance can be traced to Ignatius (AD 35-107), who interestingly is the also the source for the first recorded use of the term catholic church, linking the two together from their source.  With Ignatius, specifically in his epistles, we find him proposing, “earnest exhortations to obey the bishop and maintain the unity of the church against the Judaistic and docetic heresies.”  Additionally, Schaff comments on these developments from Ignatius, “The human bishop is the centre of unity for the single congregation, and stands in it as the vicar of Christ and even of God.  The people, therefore, should unconditionally, obey him, and do nothing without his will.  Blessed are they who are one with the bishop, as the church is one with Christ, and Christ with the Father, so that all harmonizes in unity.  Apostasy from the bishop is apostasy from Christ, who acts in and through the bishops as his organs.” (Vol. 2, pg. 146)

In his own words, Ignatius writes, “Let all of you follow the bishop, as Jesus Christ [follows] the Father; and the presbytery as ye would the apostles; and reverence the deacons as the ordinance of God.  Without the bishop let no one do anything connected with the church.  Let that Eucharist be accounted valid which is [offered] under the bishop or by one he has appointed.  Wherever the bishop is found, there let the people be; as wherever Christ is, there is the catholic church.  Without the bishop it is not lawful either to baptize or to celebrate the love-feast.”

It is significant that in our examination of the promise of Christ’s dwelling with the gathering of His people (Matthew 18:20), we see no mention of a bishop, pastor, or any other “office”.  Nevertheless, in the previous two quotes, we see that Ignatius’ doctrine of the episcopate establishes the bishop as the rule and authority of a congregation, who in turn should obey him unquestionably.  Ignatius intertwines the bishop with the unity of the church, faithfulness with obedience to the bishop, and apostasy from the bishop as equivalent to apostasy from Christ.  Primarily, Ignatius is establishing the bishop as the vicar, or earthly representative of Christ.  This is the basis for the Roman Catholic papal (pope) system.  Clearly then, any person or group that would dissent from the bishop, either on the basis of doctrinal or moral grounds, would be immediately banished and labeled an apostate, or worse…a heretic.  As Schaff notes, this essentially makes salvation dependent upon obedience to the bishop.

Can any passage of Scripture be used to support this position?  No.  Clearly then, with the “early church fathers” we already find a departure, at least as it relates to ecclesiology, from the New Testament pattern. This is worth keeping in mind as we continue through this series.

One final note on Ignatius, it’s in his writings that we find the requirement of celibacy within the episcopate, “the ascetic system of Catholicism starts in celibacy, as the hierarchical organization of Catholicism takes its rise in episcopacy.” (Vol. 2, pg. 147) For opposition to this, see 1 Timothy 4:3

Next we turn to Irenaeus (AD 125-202) and Tertullian (AD 155-240), whose doctrine of the episcopate is less developed than that of Ignatius.  With Irenaeus we see two key movements, namely the episcopate as a continuation of the apostolate (apostolic succession, which clearly smells of Roman Catholicism) and the assertion of doctrinal unity in opposition to heresies.  While initially embracing the episcopate, in Tertullian we see a departure from supporting the episcopate with his embrace of Montanism (more on this later) as he asserted that the church does not consist of bishops, but instead is comprised of a priesthood of all believers.

The foremost proponent of the episcopate during this period was Cyprian (200-258).  By far the major advancement of the episcopate, along with Ignatius’ early doctrine of the catholic or universal church, is found in the writings of Cyprian, who, as Schaff notes, is the “typical high-churchman of the Ante-Nicene age.” (Vol. 2, pg. 150)  The key summary statement from Cyprian is, “The bishop is in the church, and the church in the bishop, and if any one is not with the bishop he is not in the church.”  This, as with Ignatius, equates Christianity with obedience and submission to the bishop.  *.

In closing our overview of the episcopate as the pillar of the universal church, we have a summary from historian Philipp Schaff

“We cannot therefore assume any strict uniformity [in the early episcopate].  But the whole church spirit of the age tended towards centralization; it everywhere felt a demand for compact, solid unity; and this inward bent, amidst the surrounding dangers of persecution and heresy, carried the church irresistibly towards the episcopate.  In so critical and stormy a time, the principle, union is strength, division is weakness, prevailed over all.  In fact, the existence of the church at that period may be said to have depended in a great measure on the preservation and promotion of unity, and that in an outward, tangible form, suited to the existing grade of culture.  Such a unity was offered in the bishop, who held a monarchial, or more properly patriarchal relation to the congregation.

In the bishop was found the visible representative of Christ, the great Head of the whole church.  In the bishop, therefore, all sentiments of piety found a centre.  In the bishop the whole religious posture of the people towards God and towards Christ had its outward support and guide.” (Vol. 2, pg. 142-143)

The universal church theory was built on the foundational establishment of the episcopate.  If the latter is proved to be unbiblical and a departure from the New Testament, what does that say about the former?

In our next post, we’ll examine how this newly formed episcopate and universal church dealt with dissenters from three movements that separated from the bishops and the people of the universal church, primarily due to a lack of holiness. 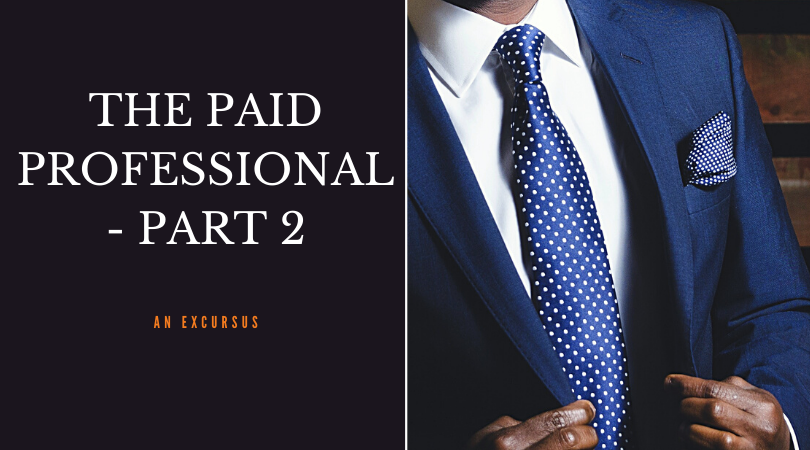 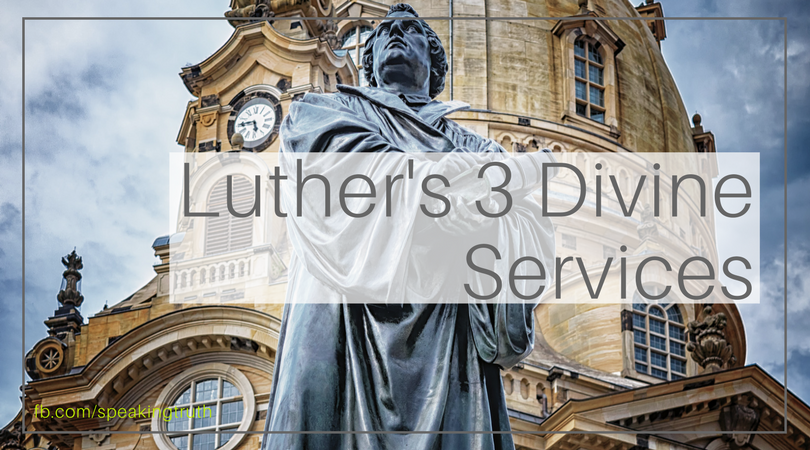 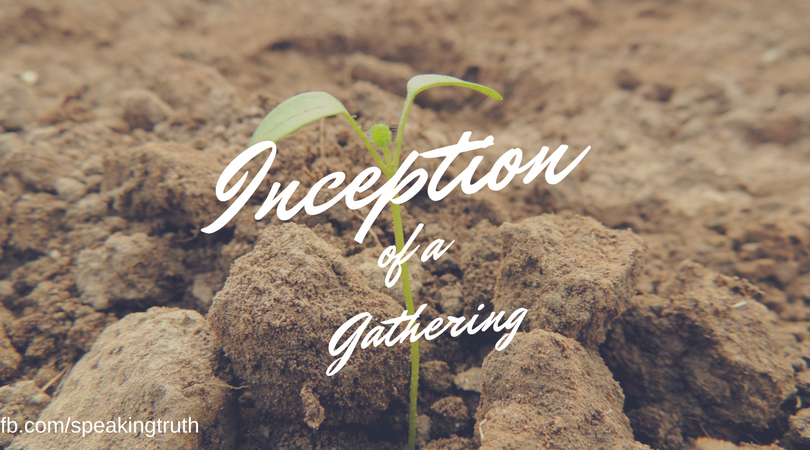